The rocks have shimmering beauty like colorful gems, sometimes as rough as giant sea monsters or a mossy blue color, those are the first impressions when coming to Co Thach Beach.

Like other beaches of Binh Thuan, Co Thach Beach is clear, blue with moderate number of waves but fast and strong. However, between the antelope with the vast white sand, there appeared a 7-color moss rock. Stone is not only black or gray, but also many colors like brown, yellow, purple, white, blue, pink, red, etc. with many very beautiful veins.

Co Thach is famous for its super-alien landscapes with rocky clusters that are hard to find at anywhere else, which making many people bewildered. In every green moss season, Co Thach Beach wears an incredible beauty.

The age of moss is usually not too long, about a month, if the rain is good, it is about two months. The most beautiful and long time is to stepping through the new-year around February to March. This season, the sea is clear, blue, the coast is not too deep so you can assured to come here to hunt lots of pretty scene. 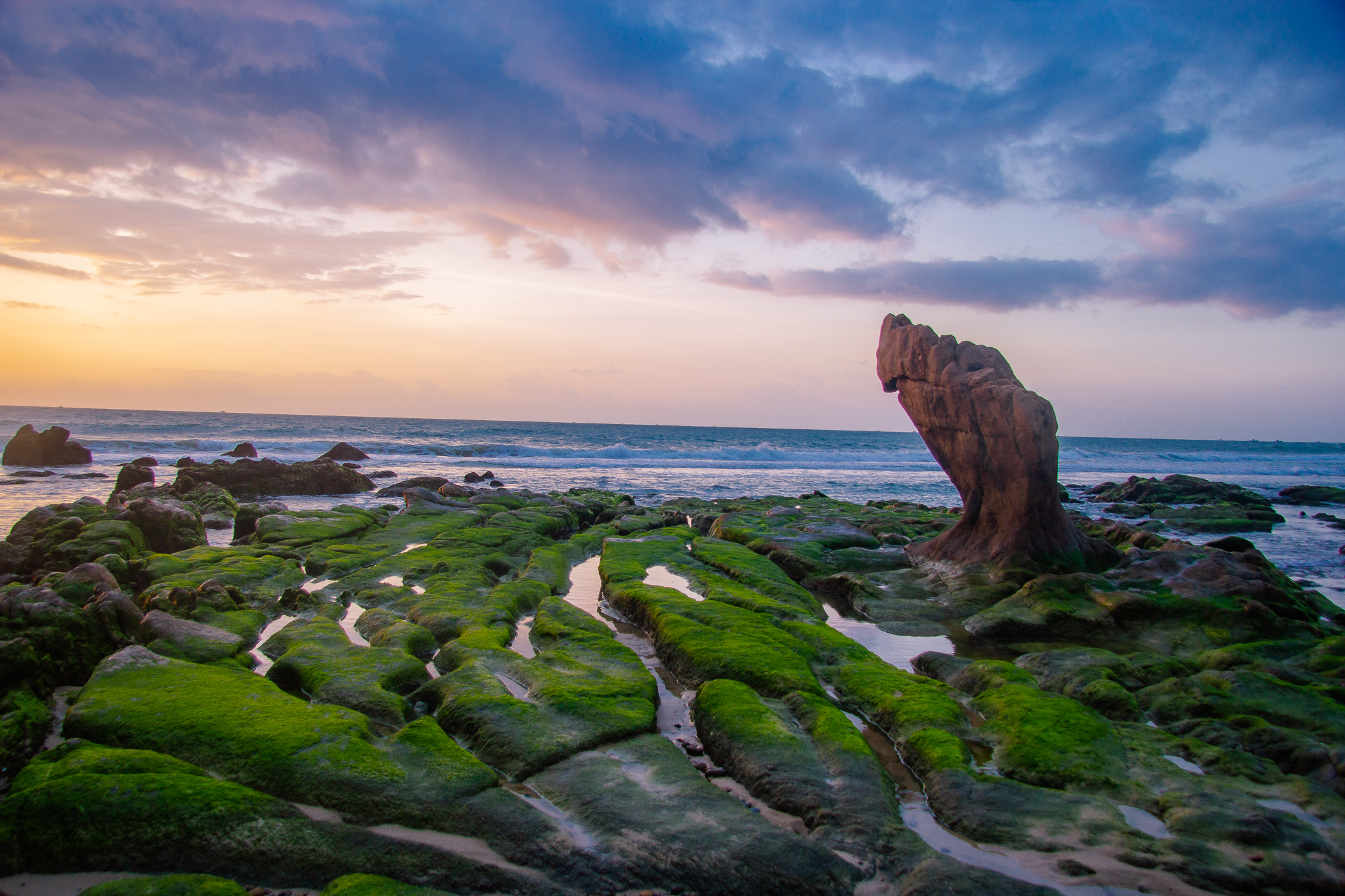 To fully enjoy this beautiful scenery, you have to go to Co Thach during the ebb tide period and the new sun rises, the moss is really green.

Co Thach Beach in the mossy season is magical, with waves flapping the shore, blooming seven-color rock with green moss mixed in rocks creating a beautiful landscape like in a fairy tale making everyone stunning.

Although not being cultivated, but every year, in this season, green moss - an aquatic species reappears, surrounded by rocks of amazing colors, clinging to the rock. Young mossy body is soft, winding like dancing with the waves. Binh Thuan beach has many layers of rock, which stretches out to the sea to catch the early sunny season compared to other beaches, so the moss here is formed early and beautiful.

When the sun rises at noon, the moss will turn yellow completely like changing to a new layer of color. During this time, many adventurers came here to hunt for moss. Co Thach Beach is sometimes quite crowded, but mostly quiet. Many times you will feel as if you are alone in the middle of majestic nature on the seven-color rocks..

Seen from above, the beautiful rocky beach is like a natural picture with thousands of interesting colorful pebbles. There is a square, sharp like a matchbox, with inflammation of the hexagon, rhombus, etc. with colorful veins.