Referring to the vole, many people will only shiver, but few think this is a famous specialty of the West. When the harvest is over, it is also the time when the vole hunting season officially kicks in. Vole meat always has an attractive taste and is a drinker's favorite dish.

Voles usually live in fields, rice fields, appear all year round in some provinces in the southwestern region. They burrow on the edge of the field to shelter, multiply and grow. In particular, field voles are overcrowded during the year-end ripe rice season. At that time, voles were fat, sleek, and delicious because their food sources were mainly rice and other types such as snails, seedlings, etc.

There are many ways to catch voles such as burrows, traps, skewers, etc. Sometimes, with just a few simple tools you can start an exciting hunt. When the rice is ripe but not yet cut, villagers will use the net, set the cage trap, then use a rope with cans to hang to make noise, causing voles to run out of rice. Then, they will pull the vole to catch. Each time, the number of voles caught can be up to several hundred. 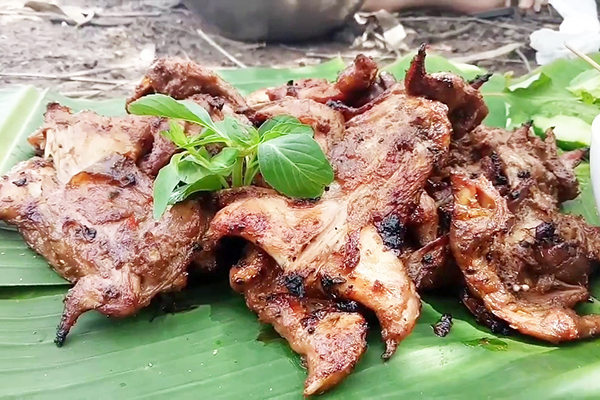 However, today the most common way to hunt voles is to use hunting dogs to sniff out live vole caves. In addition, people also dig burrows, traps, skewers from the rice fields or just smoke into the cave and voles will race out…

Vole meat is both delicious and cheap, so it has become a famous folk specialty of the West. From vole meat, people in the West can be processed into many different dishes, which can be grilled vole meat with golden, fragrant skin. Spending more time, there are voles roasting, pan-frying, stir-fry lemongrass and chilli, scoop in coconut water, roasting, etc.

Most of people in the West like the meat of the vole with coconut water the most. After processing, no one could imagine this delicious dish was made from vole meat.

In addition, grilled vole meat has also become a "brand" of the West. Gourmets consider grilled voles as delicious, nutritious, cheap, specialties that cannot be found anywhere else than this river.

Clean and seasoned voles including salt, chili, seasoning seeds, less lemongrass and minced garlic, leave for about 30 minutes. When the meat of the vole has absorbed the spices, it is grilled over charcoal until it turns yellow and the aroma is raised. When grilled, the salt will be absorbed evenly, creating the rich flavor of the vole meat.

The grilled vole meat is fragrant, has a sweet and firm taste like chicken and is especially low in fat. When eating, tear each piece of hot grilled vole meat, you can dab with salt and lemon chili to add a rich flavor to the dish. Coming to the West, enjoying vole meat, sipping wine in the middle of a boat on the river, it is an experience nothing like that.

Many people still tell each other that: travelling to any province in the West that does not enjoy the vole, it is considered that they do not know anything about the specialties of the river region.